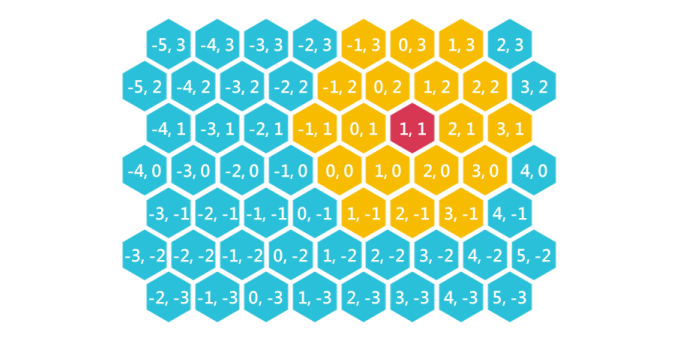 If you have done any work with hex grids, the chances are good that you came across the best guide for the mathematics and algorithms for hex grids: Hexagonal Grids by Amit Patel. One user suggested that it may be a good idea to show how Grids can be used for all the operations described in that guide (and where those functions are) since it is so popular. We agree, so here it is!

For the most part, if you use Grids, you don’t have to worry about these low-level details. Conversion to world space is handled by maps. Hex maps need a Vector2 of dimensions – the width and height of your cell, and it will automatically work out the correct spacing and division of space.

It also means that you can work with hexagons scaled differently along each axis. This is useful when working with isometric hexes, for example.

There are two cases where offset coordinates can be useful:

In these two cases, you will have to implement a conversion, something which is straightforward to do.

Grids have two methods for accessing the neighbors of a point:

Grid.GetAllNeighbors(point) gives a list of all neighboring points, regardless of whether they are in the grid or not.

Grid.GetNeighbors(point) gives a list of neighbors that are also in the grid. This is the method you will most commonly use in your own algorithms.

Hex grids also have constants defined for each direction a neighbour can be in:

These can be added to a point to get the neighbor:

Grids does not support diagonals directly, but it is easy to define your own constants for diagonal directions, for example:

You can then add them to points to get their “diagonal” neighbors:

To get the grid distance between two points, you can use the DistanceFrom method defined on points.

We provide line drawing methods as extensions for maps.

To get a line between two points, you call

To get all the points within a certain distance from a give point, you can use a simple LINQ query:

For intersections, you can chain queries

There are too complications which you may face in your game: you may wish either of these:

For this, we provide PointsInRange methods. There is a tutorial for using this feature here: ###

Hex points have several rotation functions: Rotate60, Rotate60About, Rotate120, Rotate120About, and so on.

There are also methods defined on Algorithms to transform a list of points: Transform, which you can use as follows:

As with point in range, you can use a LINQ query to get all the points in a ring around another point:

You can either use them in a loop:

We do not have this function. But it’s easy to implement as we show in this example: Field of View Example.

Hex to Pixel and Pixel to Hex

Here, you can use maps for both operations:

Generally, rounding to nearest hex is not necessary. If for some reason you do need to do it, you can simply use a map, with dimensions 1×1.

The beauty of Grids is that you need not worry about storage at all, everything is taken care of behind the scenes. This is really convenient when making more complicated shapes using the grid builder functionality.