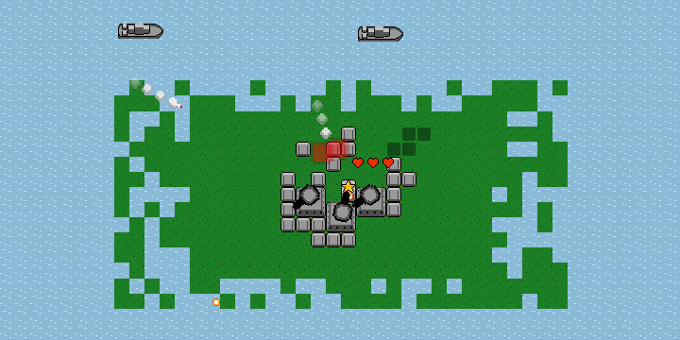 Game 17, or Tetrifender, is an action puzzle game using tetrominos! Tower defence meets Tetris in a game where you must protect your fort and sink your enemies!

Notes from the Developer:

I’ve been fascinated with tetris blocks for a while now – it’s like the chess of puzzle games – I don’t really like it, but it’s so ubiquitous that I can’t ignore that it exists and is superbly influential. So I’ve been looking at different things one can do with tetrominos, which is a natural fit for the Girds library 🙂

This game really started very simply – oh there are enemy ships shooting at you, and you block shots with tetris blocks. Making a 2×2 formation will make a turret which shoots back but is less economical if it gets shot. So there’s an interesting risk reward dynamic there intrinsically.

But as I built it, it slowly dawned on me that there’s a lot more to build in this than just that core premise! The ships, when are they shooting, how often, how do they shoot, what’s your playfield look like, how do things move, how does the difficulty curve work, etc…

It has definitely been the most over-ambitious game of my game-a-day endeavours, and I’m really glad at how it turned out and can definitely be taken further.