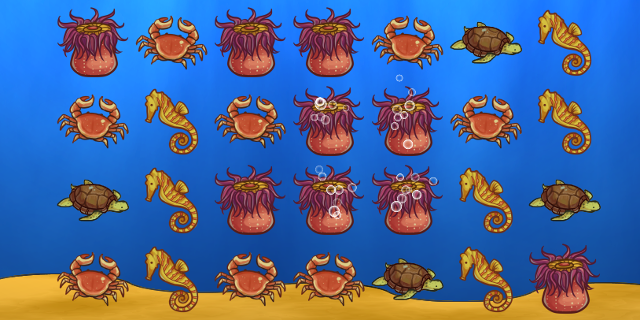 Game 6, or Sea World Merry-go-round is a simple match game. You click on a creature to rotate all its neighbors, and matches are formed when all the creatures in a 2×2 square are the same.

From an implementation point of view, match games are interesting because the “rules” are so simple, while the transition-effects logic is slightly tricky to get right. And while many games can do without transitions, match games are often unplayable without them. It was basically impossible to play this game without the animation – you could not see what was happening, and it was extremely difficult to work out in your head where to click to get an effect without some visual way to do the computation.

Transitions by themselves are not hard to implement; we have all lerped and flashed hundreds of objects. The trickiness comes in the details: where do you play the sound; do you disable input during the transition, how to you split up the game logic during the lifetime of the transition. Transition patterns are probably the most important implementation patterns game developers should have in their toolboxes.