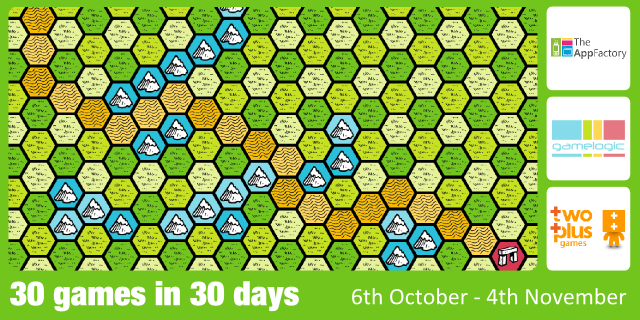 It’s been almost a year since our 30 games in 30 days project for Unity, and we’re more than ready for our next challenge. We recently ported Grids to GameMaker and in one weeks’ time (6 October) we’re going to begin our 30 games in 30 days campaign using Grids for GameMaker. We’re also taking it one step further by exporting each game to Windows Phone 8.

Although it’s our second time tackling this challenge, the stakes are different. This time we’ve teamed up with the Microsoft AppFactory and Two Plus Games. We’ve got a small army of developers on board. Some have been making games for years, for some it will be their first. A big team will take the pressure off individuals but will it require better organisation and slick production.

Grids for GameMaker isn’t as feature rich as it was for Unity at the beginning of that campaign, so there will be even more of a focus on building new tech throughout the month. These games will also be on mobile and will need to be store ready rather than just a web build. Many of the questions we have will only be answered after we’ve begun, some only after we’ve finished. It’s a bit daunting, but wow is it exciting.

Similarly to the last campaign, we’ll put the games up on our website and write about them on our blog. You’ll also be able to download them for Windows Phone 8. Again, our goal is to prove our promise that Grids helps you to make games fast. I don’t think we’ll stop until we’ve proven it on every platform, but for now, it’s the turn of GameMaker.