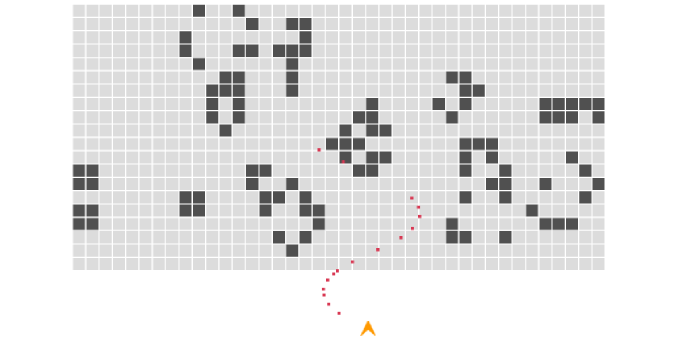 Game 13 begun as a desire to use Conway’s Game of Life in an interesting way. And so, Convader was born.

The game is spin off of space invaders that uses Conway’s Game of Life to build the targets (or Aliens). A random set of cells is generated in the grid, and then the maths from Conway’s is applied. This causes the filled cells to continuously change.

We have several ideas for future versions. One is to make levels read from bitmaps. The game also can’t be lost at the moment, so simply moving the grid toward the player will create more pressure and a lose scenario.

Here are some thought’s from the developer, Steven Tu:

I’ve always had an idea to do something with Conway’s Game of Life, and the prospect of coding it from scratch felt like it would just take too damn long. With the Grids library I literally learnt and built the bones in a day. That was awesome.

I stumbled upon the Game of Life at last year’s A MAZE, while shooting the breeze with devs from all over the world. It’s amazing how an idea from a year ago could stick around in your head waiting for the right tool/moment/experience to come out.