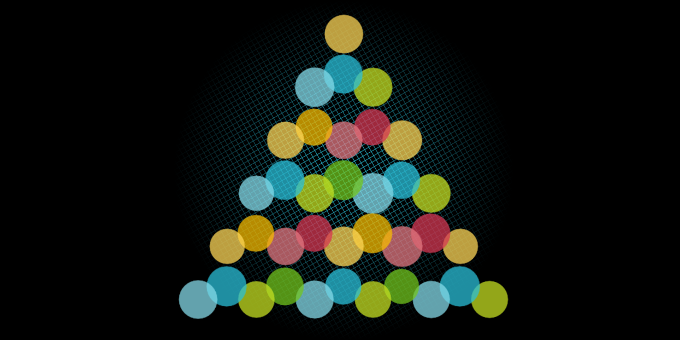 In Game 18 you have to get all the red dots together by rotating the neighbors of each dot, which are placed on a triangular grid.

Today’s Unity game provided us with several difficulties that arise from how complicated rotation is, and how tricky it can be to work with triangular grids.

First, we discovered a bug in the mapping code which only transpires if you try to rotate triangles. It’s one of those weird double bugs where two things have to change before it is fixed. This has been made doubly complicated by the fact that we also rotate triangles about other triangles, not just themselves. (It will be fixed though, so if you bought it, don’t worry, it will come with an update!).

Second, we could not find an easy way to implement a suitable “goal” for the game. Initially, we planned for the game to be a vertex-matching puzzle, with nice circular arcs that make interesting shapes. Unfortunately, designing algorithms for that turned out to be way more trickier than we thought. So we settled for a simple neighbor matching algorithm instead. We are investigating the various issues with triangular grids, and have several ideas of how we can simplify the logic.