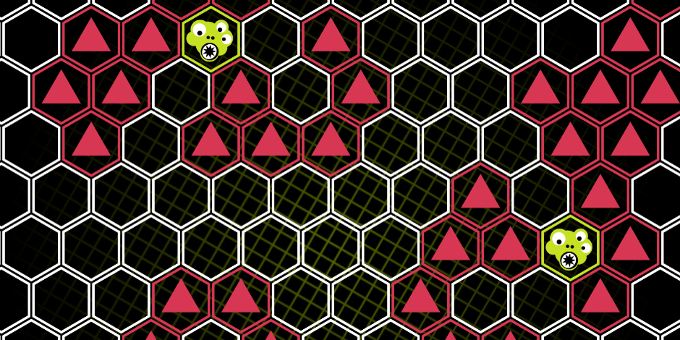 Game 1 is a riff on Lights Out (a game we also implemented on a few grids for our examples) and is played on a hex grid. Instead of trying to switch off all lights, you are trying to trap the monsters.

The controls work the same as Lights Out. Left click on a cell to change it, and all the neighboring cells will change as well.

The implementation is similar to vanilla Lights Out. You start from a solution state, and toggle cells to form a puzzle. Working backwards from a solution ensures there is a solution. The puzzles are all procedurally generated. Using only random puzzles produces ugly, unsatisfying puzzles, so we make the puzzles symmetric. This involves two steps:

First, we select the monsters to be symmetric when possible. We have different algorithms for different types of monsters:

Second, we select the cells to toggle with the same scheme as above, except that we select randomly whether how many cells (2, 3, 4, or 6) to toggle for each randomly chosen toggle position. The possible cells that can be toggled is selected from the initial cells that are in a “closed” state, and all their neighbors.

We have played quite a few versions with the toggle-mechanic. Here are our observations: