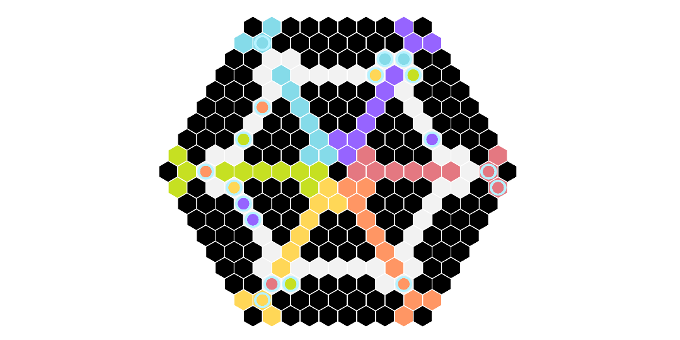 Game 3 is a version of the famous game Ludo. This version is played with 6 players on a hex grid.

Like Ludo, the goal is to move all your pieces from the start to finish. Players take turns throwing a die, select a piece to move, and move that piece by the number of cells indicated by the die. If a player lands on a cell occupied by another player, the other player is kicked back to the start. If the player lands on a cell occupied with one of his own pieces, he moves to the closest open cell before the second piece. (This differs from the normal Ludo, in which the two pieces become replaced by a “King”).

The first player to get all his pieces to the home base wins.

Ludo played against the computer is not much fun 🙁 The normal drama of rolling a die is missing. The pace is too fast for there to be any anticipation over what pieces the opponent selects – if we make it slower, the game becomes really boring…

Some of these problems can be solved, but one problem is very tricky: the balance between the number of pieces, the number of players in the playing field, the length of the main track.