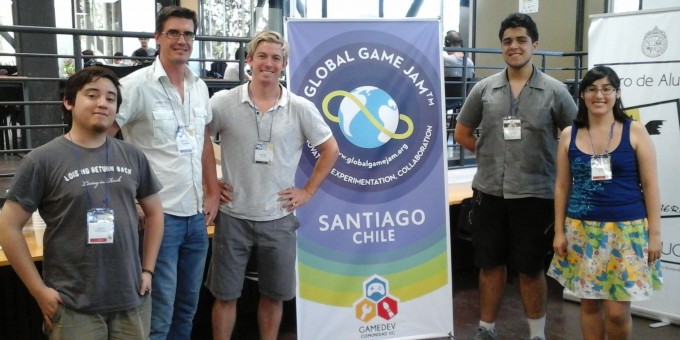 Last year we attended the Global Game Jam in our home city of Johannesburg. This year we were on the other side of the world. In Santiago, Chile.

The event was organised by Gamedev: Comunidad UC, a game development community, focused on game design education and growing the game dev industry in Chile. We arrived on Friday afternoon and were warmly welcomed by their team, which is headed up by Hector Calderón Bessi.

After a few tech talks, we and over 100 other developers watched the keynote in a lecture theatre in el Universidad de Catholica (the venue for GGJ15 Santiago). We then went outside for the group activities. Queue the first bit of nervousness for attending a game jam in South America! Our Spanish has improved over the last few months, but we certainly weren’t ready for an in-depth discussion on the status and growth of the game development industry in Chile.

But people made an effort to speak in English, to include us and to ensure we felt comfortable. There were three discussions and we were grouped differently each time, first by skill set (programing, art, sound etc) then by experience (newbie, student, professional) and lastly by favourite game. I usually find these types of “getting to know each other” exercises silly, but this ended up being a good icebreaker and a great way to get to know some of other devs, especially since many had never met before. 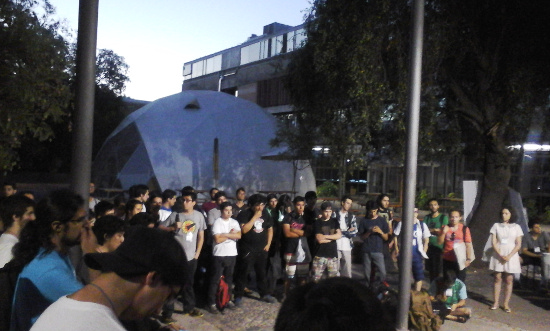 We got into our groups (mostly between 4 and 6 people) and went through to the main venue, which had a very cool setup. There was lots of room, spacious desks, white boards, lightning fast internet and most importantly, coffee and snacks! Herman and I decided to work alone due to the language and logistical differences. For those of you that know us, we have a particular way of going about things that normally involves crazy ideas, grids and Grids. 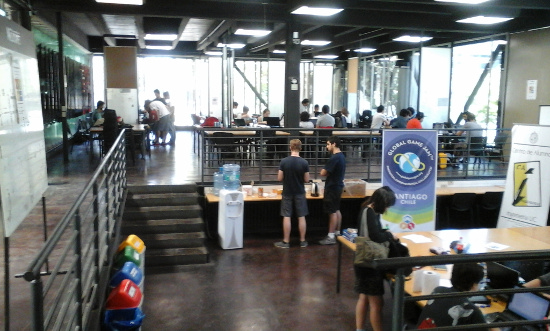 The organisers went to the trouble of making a checklist that laid out suggested tasks for the three days. A step by step guide on how to go about your development to ensure that you got something out at on Sunday. This was a great idea, especially for first time jammers! Most of the attendees were students, but there was a handful of experienced devs there too. 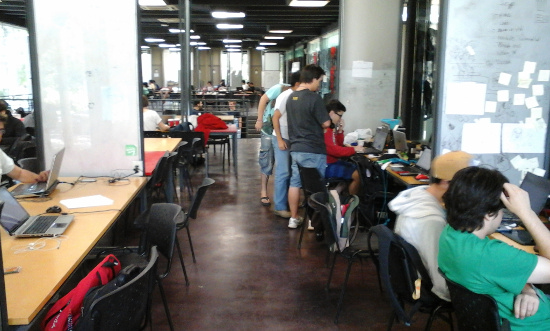 One major difference between South America and Africa are the hours that people eat, work and sleep. Eating dinner at 12am and going to a pub at 3am is a normal night out. So it’s no surprise that the official start time for development was midnight on Friday. However, if there is one event where working hours are impossible to distinguish between countries, it’s GGJ. For 48 hours hardly anyone seems to sleep, and for the people that do, under a desk is more than acceptable.

This year we put all our effort into making a fun game, rather than something technically advanced like in our previous GGJ. This was always going to be a bit riskier for us (we’re more known for our cool tech), and after a full day of developing a level editor, there wasn’t any sign of a fun game yet. Stress was high, sleep was low, and the pressure was on. During the group discussions we were introduced to everyone as the developers from South Africa. We had people come over to our work station throughout the weekend, asking us what we did and why we were in Chile. There were definitely a few more eyes on us than usual, and we wanted to deliver.

By about 2am (and after some free pizza organised by Hector and the gang) our game started to come together and when we called it a day at 4am, we had done enough to warrent a few hours of sleep. On Sunday we added a few more levels (the level editor paid off big time) and made some final adjustments. 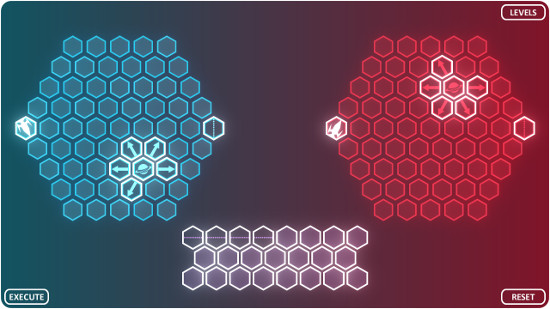 Next up were the presentations. There were 13 groups and a great presentation area. We didn’t understand much of anyone’s explanation of the use of the theme, but we could follow the game demos. There was a relaxed and fun atmosphere. People were genuinely interested in what their peers had built, and I felt a wonderful sense of appreciation and comradery. Puzzle games were the most popular and art styles varied quite a bit. There was also Koala shooting squirrel game (classic). One game that stood out for us was called “Off”. A mysterious game with an interesting mechanic and art style. (Check out the rest of the games here.) 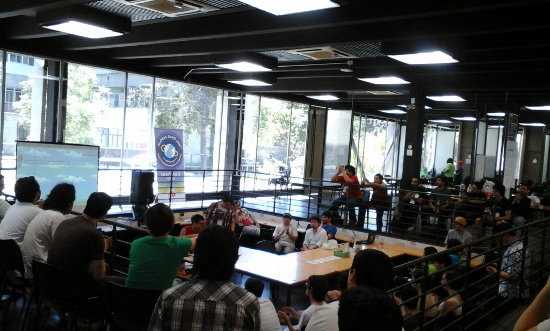 We were both reasonably happy with the game that we made. However, it was received much better than we expected. I think people were impressed by what we made with a two man team (here is our customary Grids promotion) in slightly less hours than many of the other devs (yes we went home to sleep!). We presented in English and were bombarded with a bunch of question, which was a lot of fun.

Overall I was impressed with the organisation of the event. For us it was also a great networking opportunity. One of our goals in Chile is to immerse our sleeves in the local development community, and what better way to do that than by jumping in the trenches to make games alongside fellow developers. Chile has a relatively small community (like South Africa) but there are some seriously passionate people here. Combine that with an eager group of young developers and designers, and I can only see the Chilean game idustry industry growing.

I think we could make a habit of attending new Game Jam each year, although our next venue will need to be on top form to match our new friends here in Santiago.

You can download our GGJ15 game (Parallel Commander) HERE